Best Places to Visit in Greece

Greece is a country in southeastern Europe with thousands of islands throughout the Aegean and Ionian seas. Greece & the Greek Islands are famous for 3 things: ancient civilization, amazing landscapes, and well-established tourism. Greece is so rich in culture and beauty that it never seems to be completely explored, no matter how many times you visit it. The hot sun, the relaxing beaches, the marvelous nature, the rich culture, and the warm hospitality will charm you from the first step in the country. There are so many islands and mainland resorts in Greece that it will take you many years to explore the entire country.   Greece is a country that is at once European, Balkan, Mediterranean, and Near Eastern.  Greece has an area of mainland, which is very mountainous, and hundreds of small islands dotted around in the Aegean and Ionian seas. 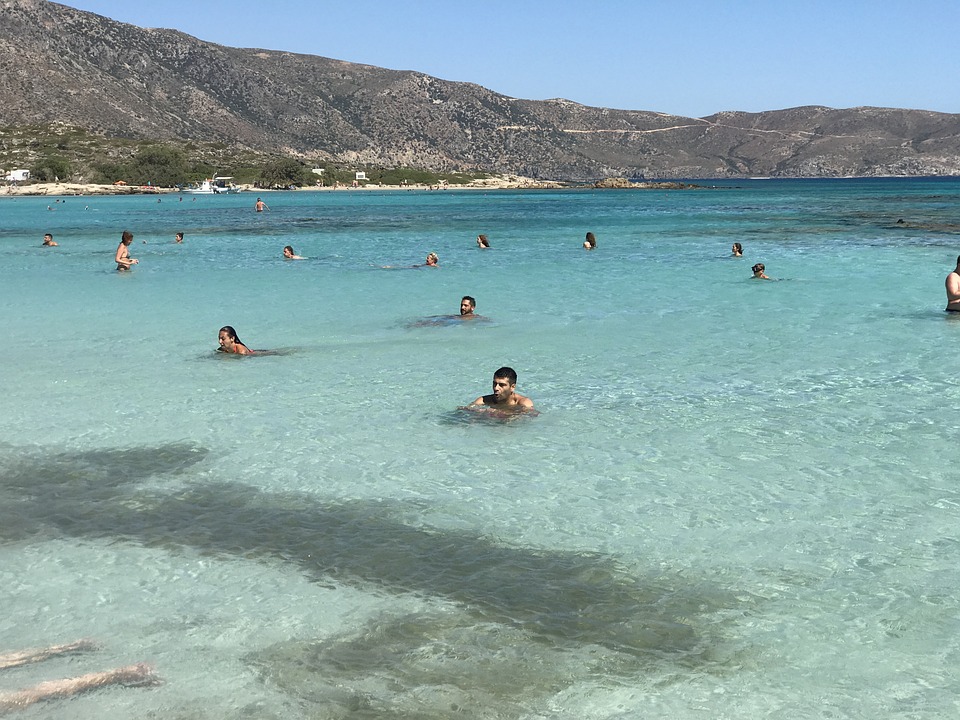 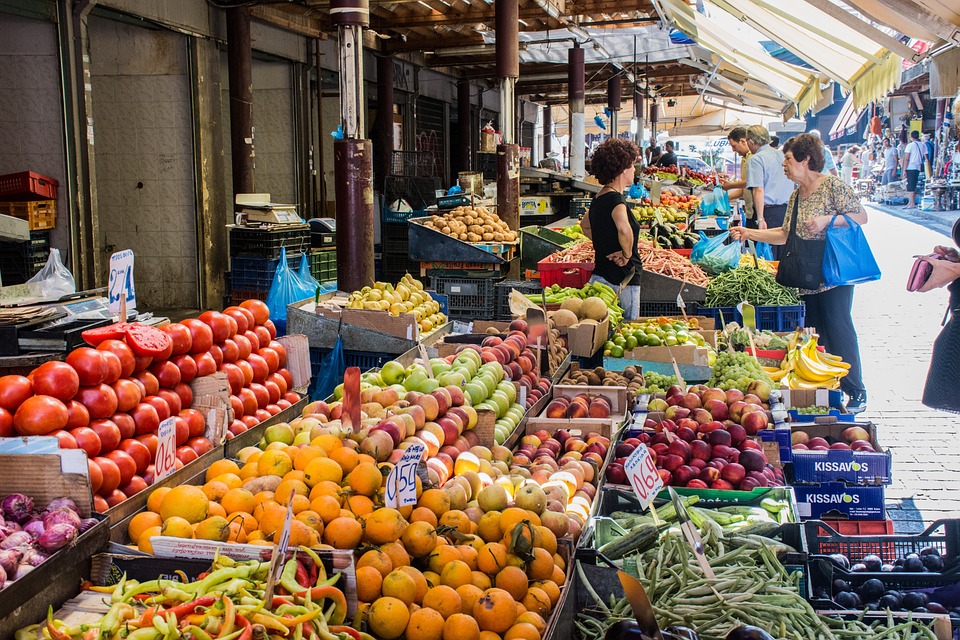 Athens  fruit and vegetable market is part of the bustling complex of the Varvakios Agora. Stalls full of fresh produce set up every day except Sunday. The Athens Fruit & Vegetable Athens Market extends over an area of 260,000 sq. meters area which hosts about 350 wholesalers, supplying the largest proportion of the Greek population with fresh vegetable and fruits. This organisation controls two fruit & vegetable wholesaler’s markets, 11 fish markets and a meat market in Greece. The Athens central market (Varvakios Agora) is a great place to save money on food. You’ll find halls of meat, fish, vegetables and fruits from all over Greece.

Mylopotas beach is the most visited beach in Ios Greece, located close to the main village, Chora. Mylopotas consists of two parts; an organized area equipped with sunbeds and umbrellas and an unexploited area where you can lie under the warm sun. The 1km long Mylopotas Beach is the biggest and most famous of the Ios beaches on Ios Island Greece. This is a long white beach with sunbeds for rent but also with some large and unexploited areas to lay your towel on for free. You will find many restaurants and drinking holes along the beach. Mylopotas beach is a stretch of sunny beach lined with bars, restaurants, hotels, and a youthful party scene. Depending on the day or time of day this stretch of beach could be quite and lazy in the sun or have music and people dancing on cars. The market of Rhodes is one of the most highly developed in Greece.. Every Wednesday and Saturday in Rhodes town, near the cemetery and the little beach of Zephyros, is the laiki, the people’s street market. On the other side of the busy road, most people pass by the ancient Hellenistic city walls without noticing them. The market opens early in the morning to 2 p.m. Here you’ll find a wide variety of fruits, fresh fish, herbs, clothing, shoes, textiles and embroidery. You can try the fruits before you buy. The traders encourage you to try their fruit, to prove that they are the best in the market. 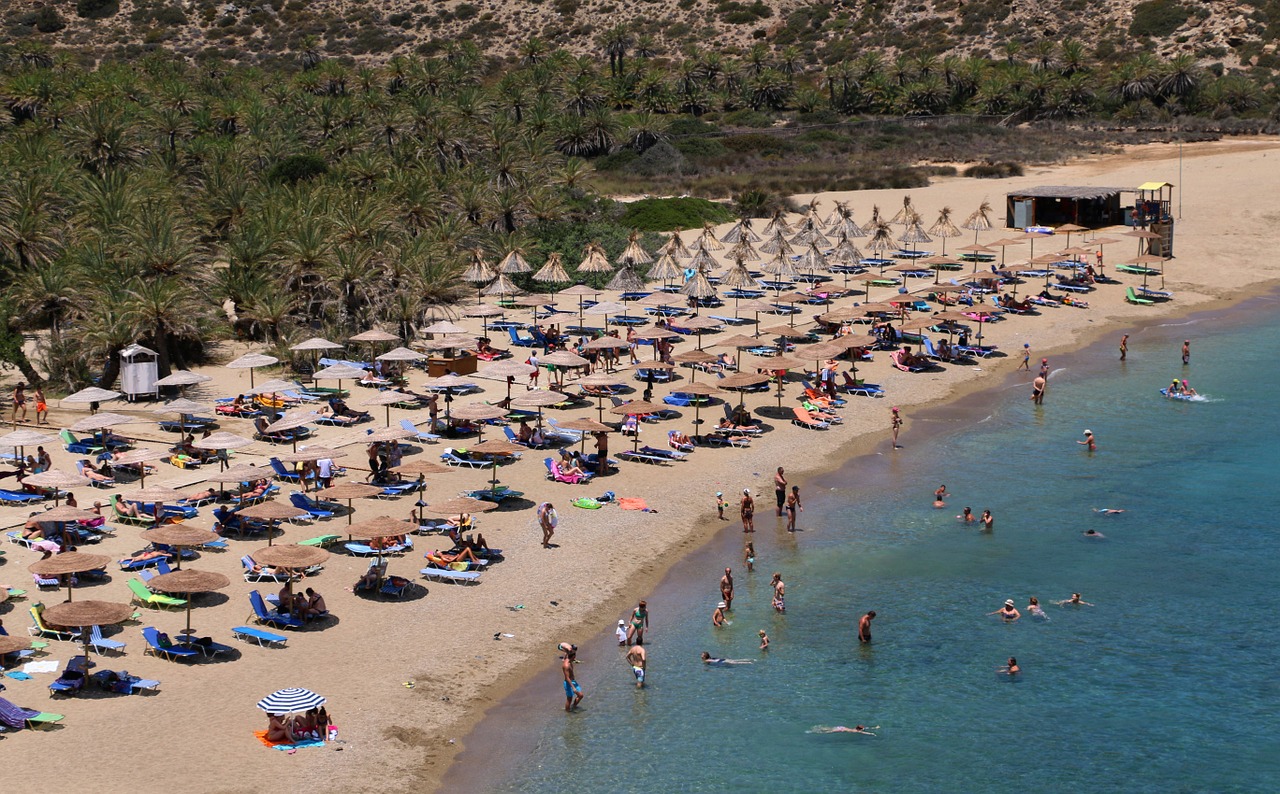 The palm beach of Vai is one of the largest attractions of the Mediterranean island of Crete. Vai, the palm forest of Vai in Crete, ends in a lovely beach near Sitia. The palm forest of Vai is one of the most popular sights in Crete.Vai beach is 94km east of Agios Nikolaos and 24km east of Sitia, on the east coast of Crete.   It is the most famous beach in eastern Crete. Vai Crete Beach  is a beautiful unpopulated beach of fine sand and pebbles at the far eastern tip of Crete. It has a unique and luscious palm forest of a species found only on Crete. Even without these wonderful tall, leafy palms, it is a spectacular beach with clear, clean water, excellent snorkelling and plenty of room for everyone. 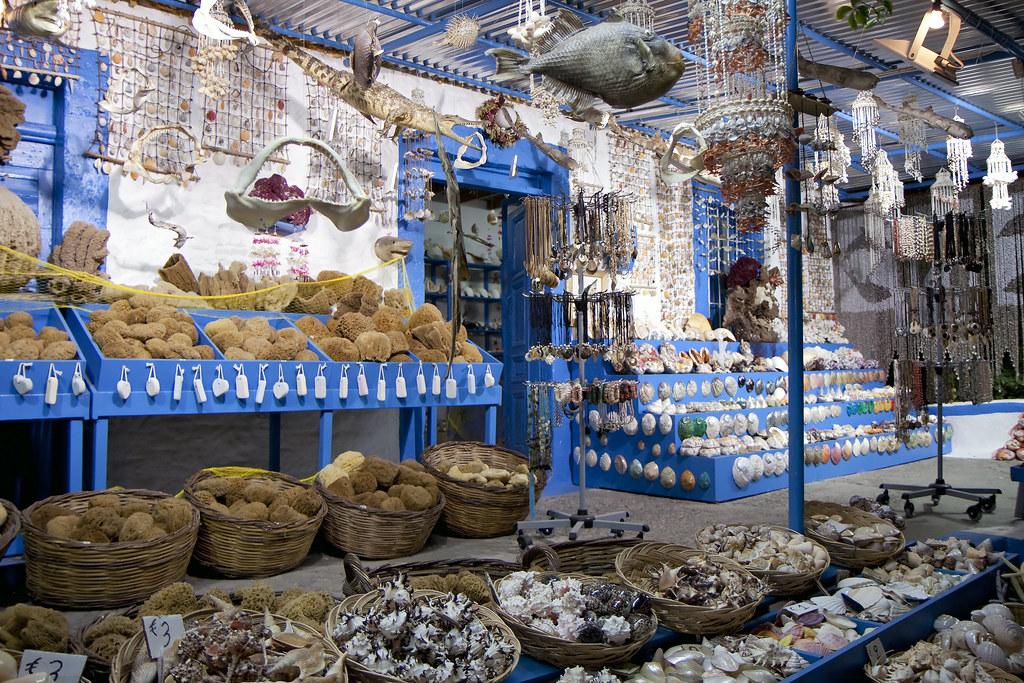 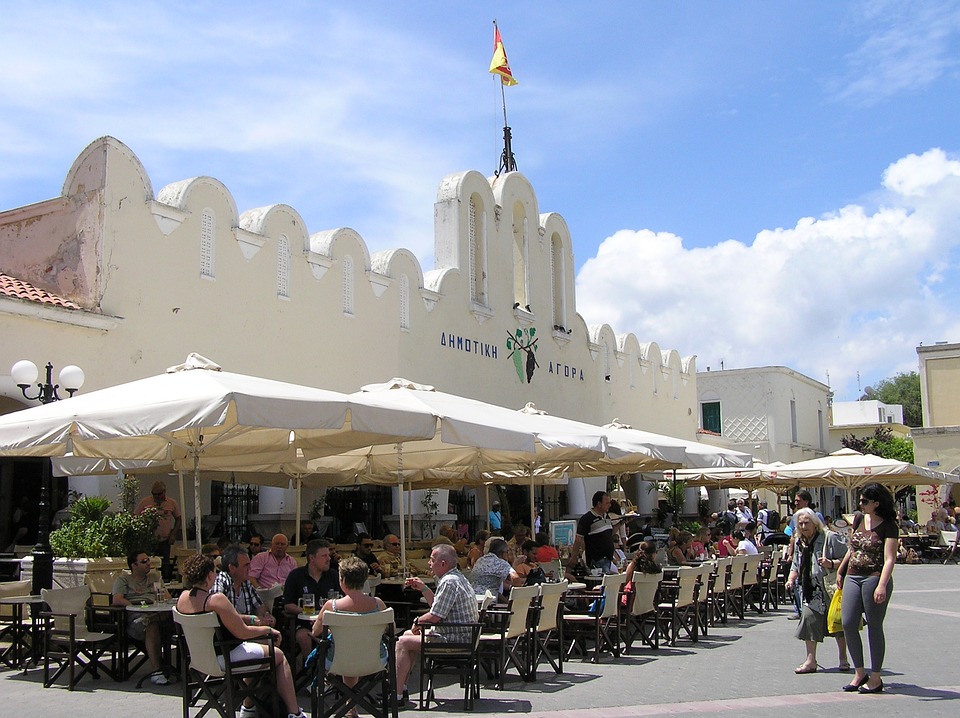 The market starts to bustle in the evening: to ditch the masses, wander through around mid-day.The Kos Town market in Eleftherias Square, on the island of Kos in Greece. There are plenty of local goods to purchase and great gift ideas: fresh and dried fruit. The Kos Town market is a small indoor market on the edge of Eleftherias square. Kos Island is among Greece’s most popular tourist destinations, receiving millions of visitors each year who are drawn by the islands’ history, gorgeous beaches, bountiful land with thick vegetation, casual atmosphere, and luxury resorts.

7) Sea kayaking in the Sporades islands The Sporades is a group of Greek islands in the northwest Aegean sea. The longest crossing on the trip is more or less 12 km; you don’t need to have experience in open crossings but you do need to be able to paddle 2-3 hours without landing. The Sporades, meaning scattered islands, refers to a collection of islands totaling to about 24 islands located in the northwest of the Aegean Sea. Sporades is a beautiful Aegean region, full of lush vegetation, sandy beaches and secluded bays. The breeze on Greece’s beaches isn’t just handy for cooling down while you’re sunbathing: it’s perfect for windsurfing and kite surfing, two of the country’s fastest-growing sports. 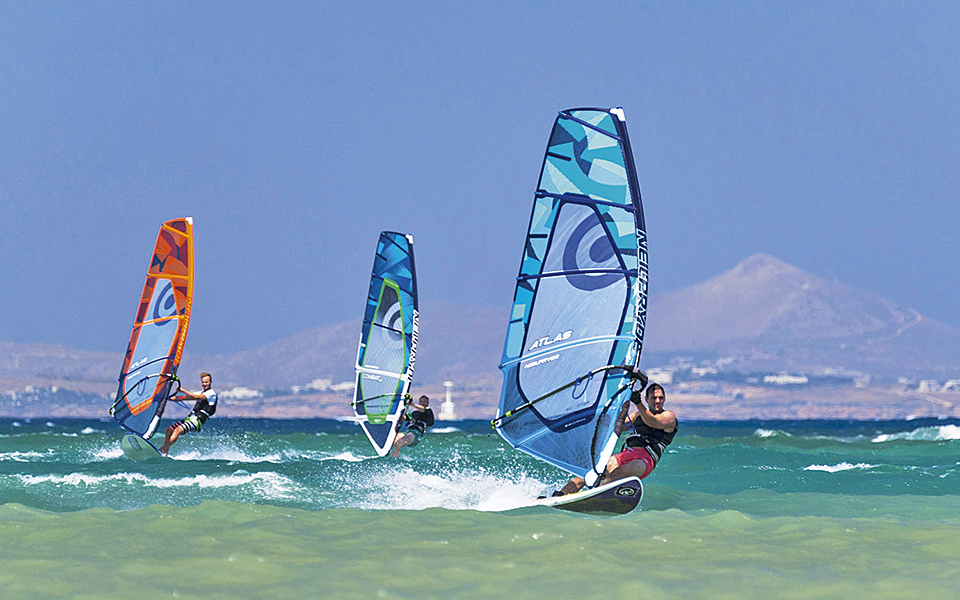 Windsurfing in Greece The best windsurf spots in Greece are Mikri Vigla beach in Naxos, New Golden Beach in Paros, Agios Ioannis and Vassiliki beaches in Lefkada and Prassonisi in Rhodes. The wind in the Aegean Sea is strong in summer, especially in the afternoon hours, creating perfect conditions for such sports. Windsurfers will find a heaven of bright sun, sparkling refreshing waters, and strong winds.  The island of Rhodes is perhaps the most popular and notable destination for serious Greek windsurfers today. Ixia Bay, also known as Surfer’s Paradise, is found on the northwest coast and is a popular choice for windsurfing holidays in Greece. 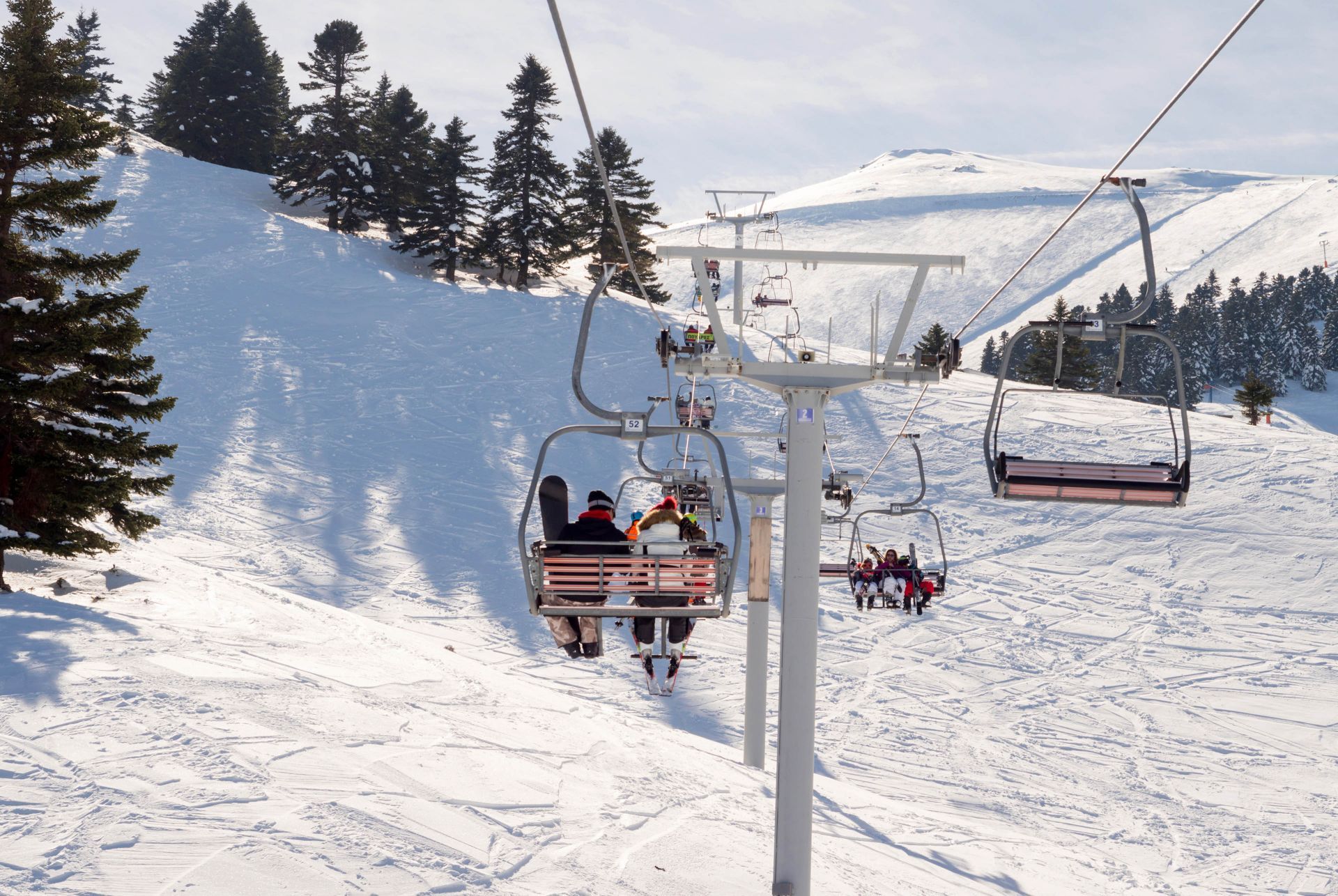 Thessaloniki is already covered with snow and all ski resorts of Northern Greece are ready to welcome ski fans. So, whether you are a speed-loving fanatic or simply someone who enjoys drinking his coffee by the fireplace of a chalet, get ready to hit the slopes of Northern Greece. Kaimaktsalan is the third highest mountain in Greece – Kaimaktsalan means white top- and hosts a famous ski center with excellent infrastructure, near the village of Palios Athanasios. This ski resort on Mountain Parnassos is the most popular in Greece and is just a two hour drive from Athens. With two peaks, Kellaria, which is 1750m high, and Fterolakas, which is 1950m high.Incredibly well-equipped, it boasts 13 ski lifts, 19 ski runs, 7 ski routes, 10 trails and 3 mini beginner runs, two cafe-chalets, a restaurant, and ski and snowboard schools, stores to buy and rent ski and snowboard equipment. 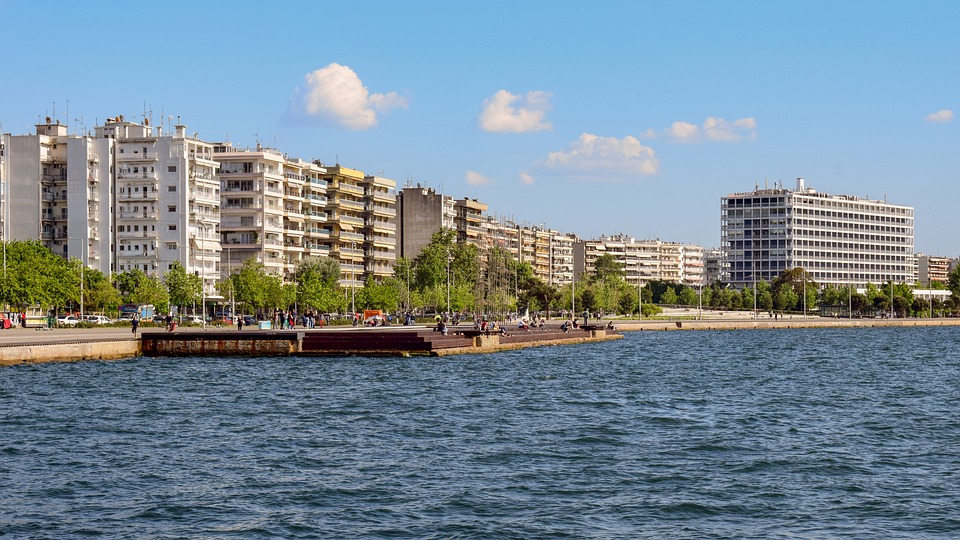 Thessaloniki (520 km. north of Athens) is the second largest city of Greece and the most important centre of the area. Thessaloniki, (also known as Salonika or Saloniki,) has given Greece some of its greatest musicians, artists, poets and thinkers. It has some of the most beautiful beaches and has some of the finest hotels and best restaurants in northern Greece. Thessaloniki, located on the Aegean Sea, is a popular tourist destination. It is the second largest city in Greece, with over 1 million inhabitants. The Archaeological Museum of Thessaloniki is one of the largest museums in Greece and the central museum of northern Greece. 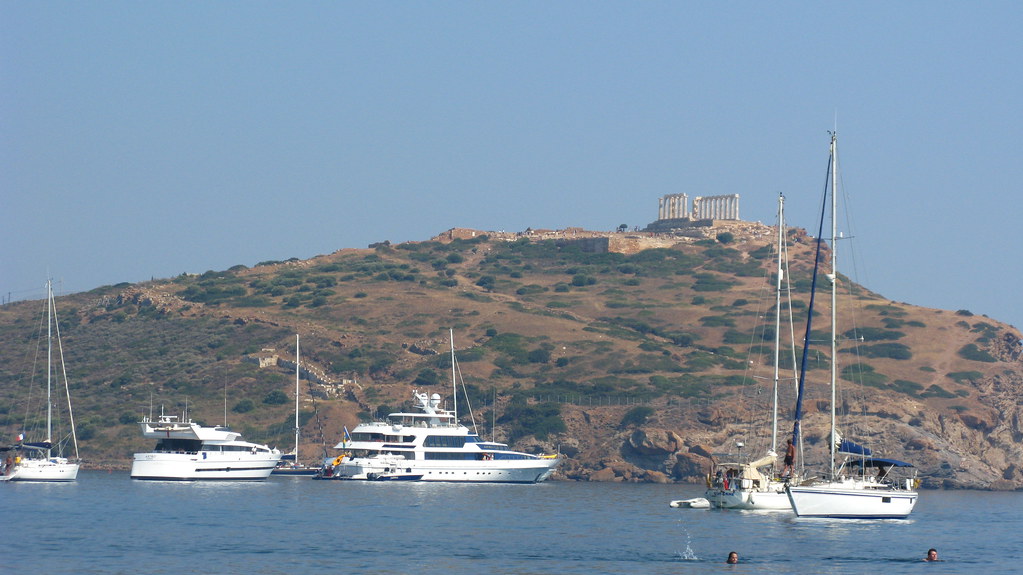 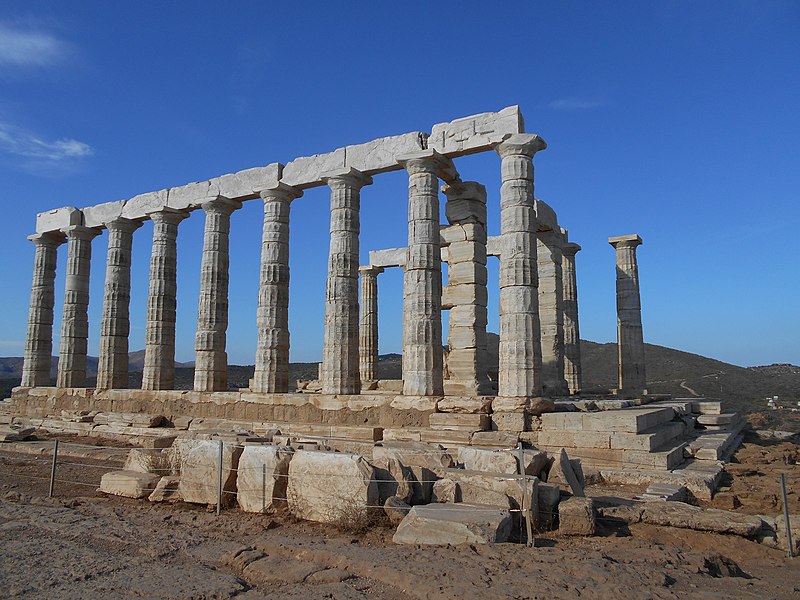 Patras is a city in Greece. It has a population of 222,460. The majority group makes up 90% of the city’s inhabitants..Patras is the capital city of the Prefecture of Achaia and the Region of Western Greece.  In Patras’ hilltop upper town, close to the castle is a Roman conservatory for musical performances, built during the rule of Emperor Augustus at the turn of the 1st century AD. Patras, Greece’s third largest city, is probably mostly known for its port, which connects the country to Italy. Patras, the main ferry entrance city for tourists heading for Greece, is a town known for its carnival.  This town gets busy due to its port that serves ferries schedules to the Ionian islands and Italy all year round. A place with a long history, Patra in Greece has many interesting sights to see, such as the Medieval Castle, the Roman Odeon and the church of Saint Andrew, protector of the town.